As Kim has described in her earlier posts, our team has a dual mission: at Christmas Island, to document the impacts of the El Nino event on coral reef health; and at Palmyra Atoll a bit further north, to look at the physical changes taking place around the atoll during the course of the event. Here is a map showing both, with Hawaii included for context: 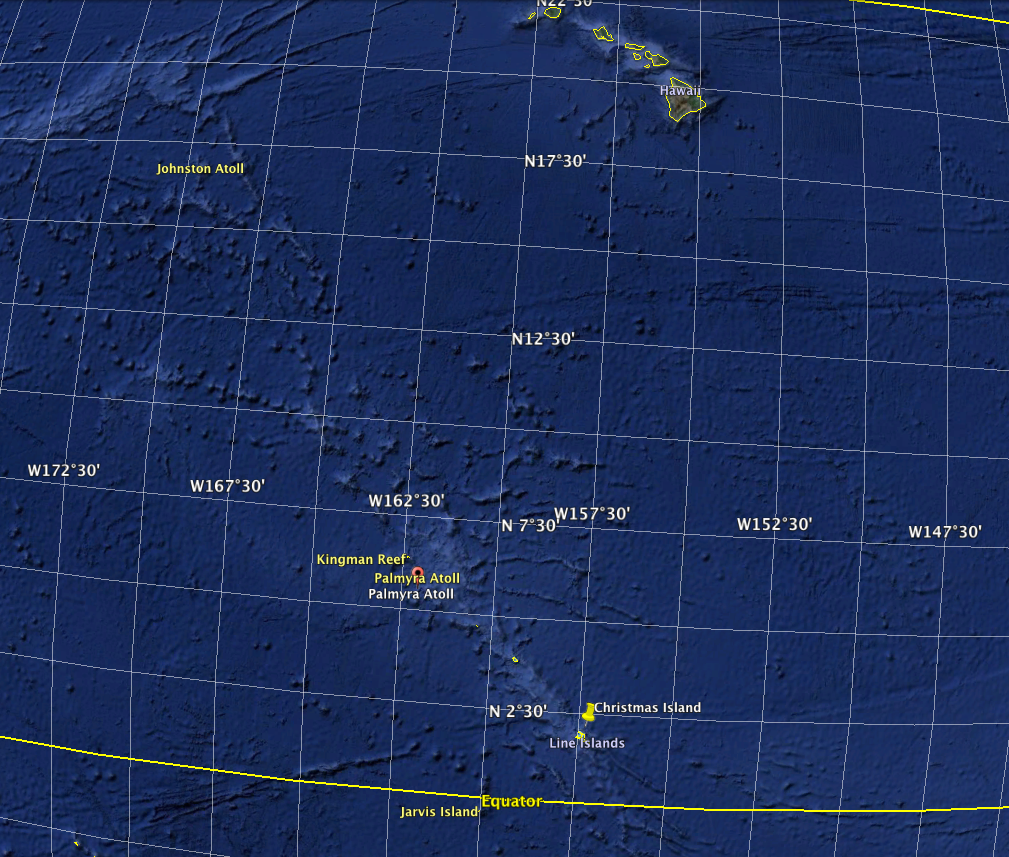 The physical-oceanographic (PO) side of the proposal is very closely related to the work I'm doing under an NSF postdoc fellowship: modeling how El Nino and La Nina events create changes in the oxygen isotopic ratio in seawater near tropical Pacific reefs. This is really important since when you try to reconstruct past climate variability, you're assuming a relationship between the thing you're measuring (coral oxygen isotopes) and the thing you want to reconstruct (El Nino/La Nina). So I'm working on trying to understand that relationship as well as possible - we started out simply using the new version of an ocean model we've developed, but when the 2014 El Nino was looking like it might be 'The Next Big One' it seemed like a great opportunity to get out in the field and collect some data as well. And even now that the likely size of the El Nino is smaller, from my perspective it is still a great opportunity, since we'll just be able to assess what small El Ninos, rather than big ones, do to isotope changes near the reefs.

The PO project would not have been possible without Mark Merrifield, who made all the Palmyra logistics happen and supplied his amazing team of dive technicians to do the installation of instruments on the reef. We'll be measuring temperature, salinity, and the speed of currents in several spots around the island. Then the other set of data we'll be collecting is the isotopic ratio of oxygen in both rainwater and seawater at Palmyra. Taken together, this will give us an idea of pretty much everything that can affect isotopes in seawater near these reefs.
Now, normally the work that I do takes place on a computer screen, so I was already pretty excited about going to collect "real" data. And I have to say, if you have to pick a single place to do fieldwork, Palmyra is a pretty excellent choice! Unlike Christmas, no one actually lives on Palmyra - it's a wildlife refuge and the only people there are scientific researchers and support staff from the Nature Conservancy (TNC) and the Fish and Wildlife Service. So it's an extremely pristine environment, and everything is designed to make the research experience as easy as possible. Of course, the fact that no one lives there means it's a lot harder to get to than Christmas... the only flights in and out are on a jet chartered by TNC, that comes once every week to week and a half (and sometimes not at all, if you're unlucky with the weather).

When we were at Palmyra, most of the time the population of the entire atoll was only 15, which gives things a bit of a "summer camp-like" vibe. You stay in small cabins, have assigned chores, and eat communally at set times: then there are scheduled activities every week like "science night", when the visiting researchers give brief talks on why they're there for the other scientists and the staff. And because it's such an isolated environment, the snorkeling you can do in your spare time is some of the most incredible I've ever seen: 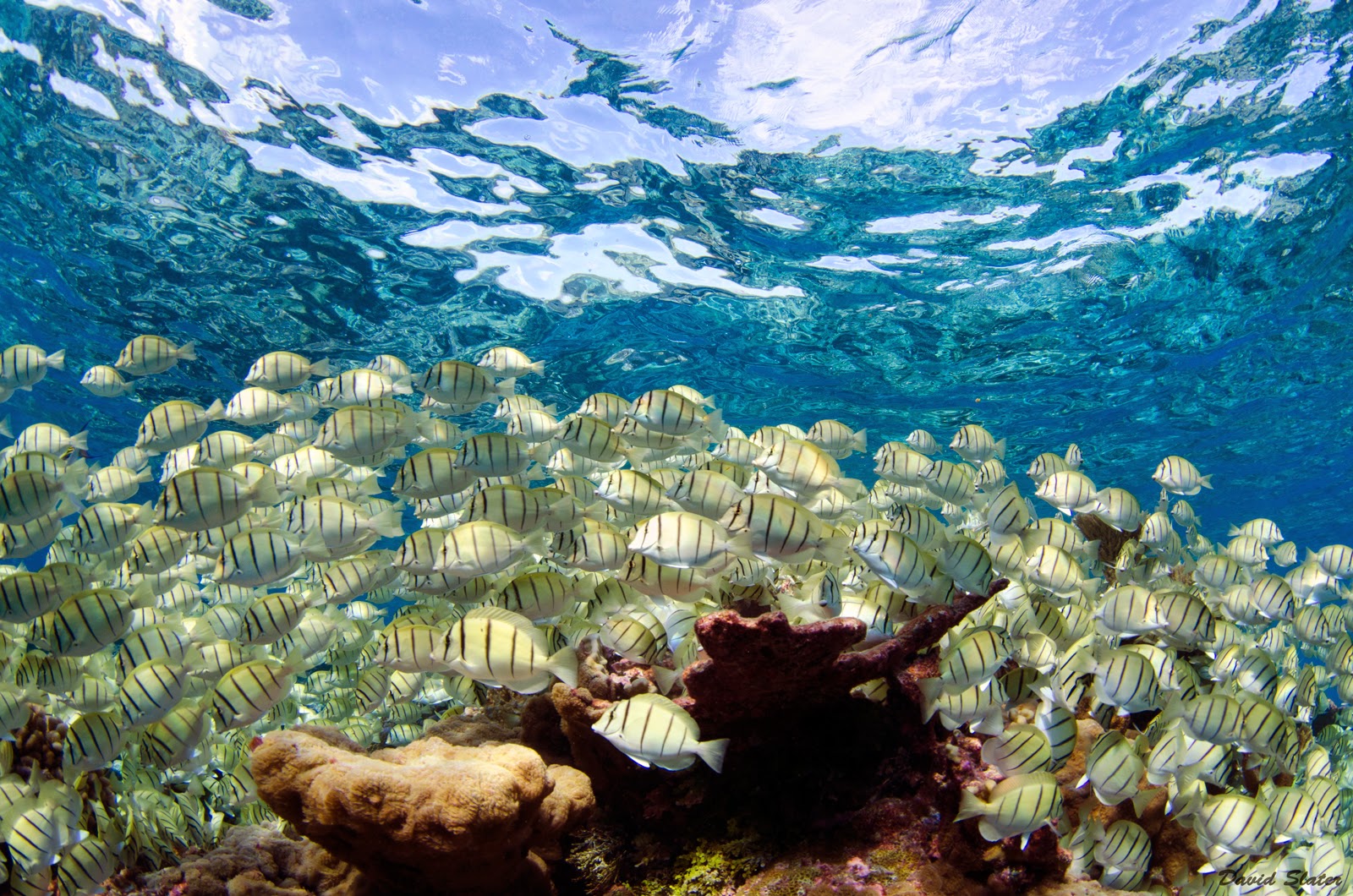 Our little expedition achieved its goals without too many issues, aside from having to revisit a couple of sites during more favorable weather conditions. We visited five different sites around Palmyra: one each on the northern, northwestern, western, and southern sites plus one inside the channel that connects the lagoon inside the atoll to the open ocean. In each location, we installed a specially designed mount which holds a CTD (conductivity/temperature/depth) sensor which measures temperature and salinity, and an ADCP (acoustic Doppler current profiler) to measure current speeds. The whole thing is weighted down by 60 pounds of lead, and looks like this: 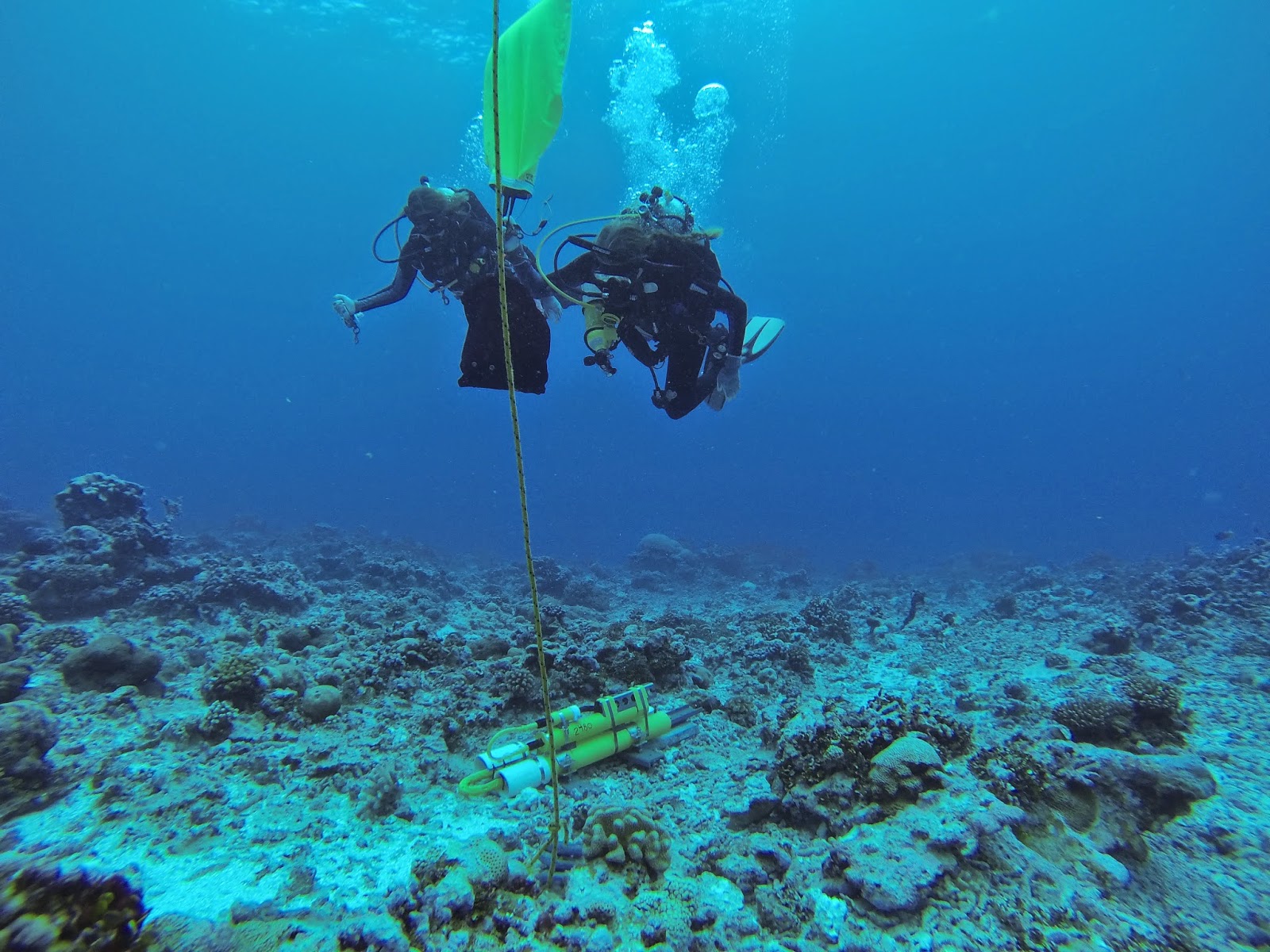 (pic also from Dave Slater, this time with my GoPro)

The two divers are Carly and Christina, who did all the prep work and testing at UH. They did a fantastic job! They also did the transporting of the CTD and current meters down to the ocean floor by 'lift bags' (yellow bag you see above, it is quite buoyant and helps you deal with carrying lots and lots of lead underwater), and staking everything down into the reef with long metal poles. All the techs will be returning to Palmyra in March to retrieve the instruments and put new ones down, and I am eagerly awaiting all the data that's hopefully being collected as we speak.

Back on land, we also set up a program to collect samples of rain and seawater at regular intervals, to be analyzed by Kim's lab for their oxygen isotopic composition. I installed a rain collection system prepared by Kim's student Jessica Moerman, right next to the rain gauge that was already in the main camp area: 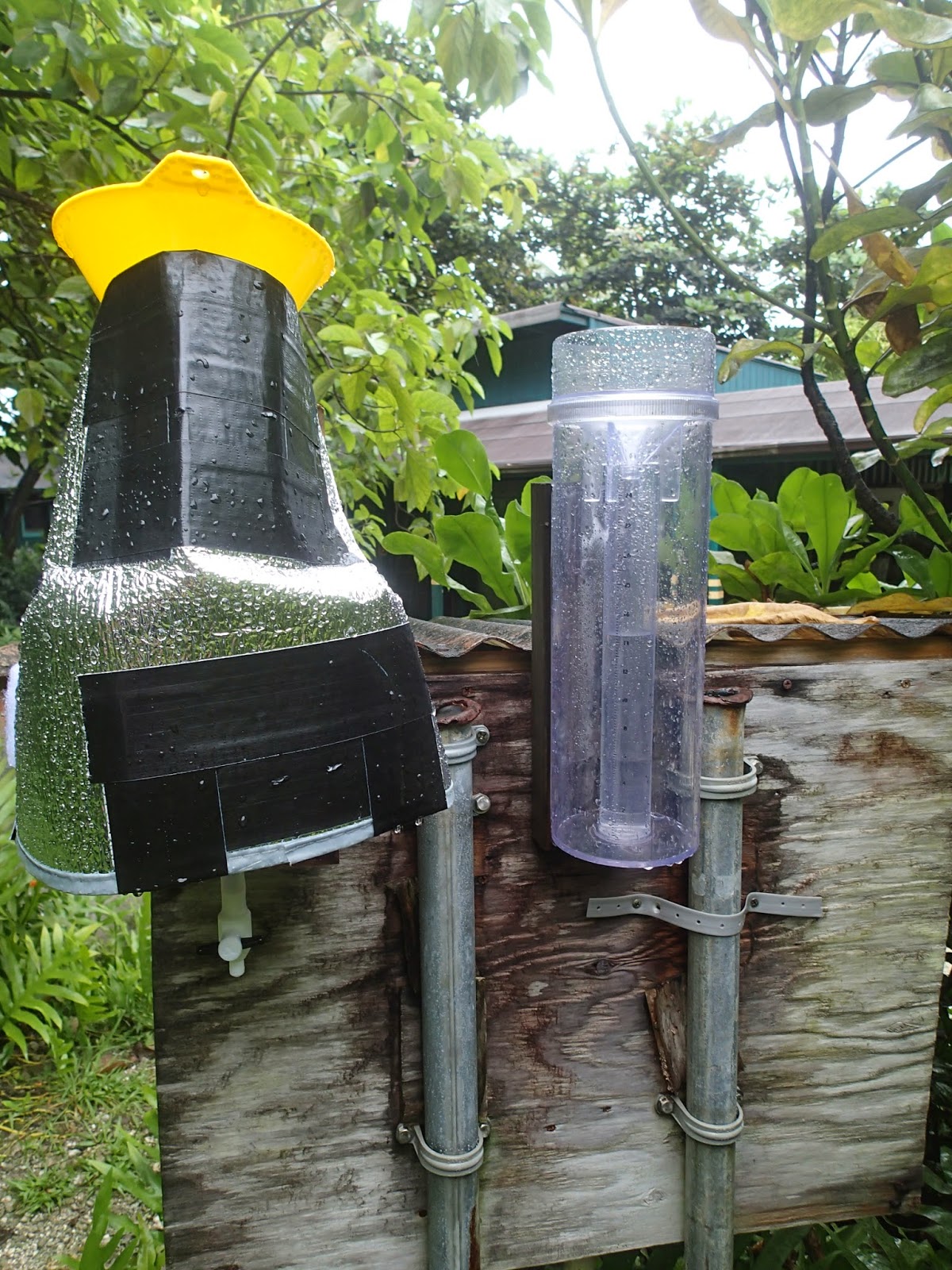 Our collector is the one on the left, and the on-site staff were nice enough to agree to empty it every day and collect a sample for us along with recording the amount of rainfall. And being the amazingly nice people that they are, they also agreed to collect samples of seawater every week. This doesn't sound like it would be all that difficult on the face of it, but there aren't exactly very many trails around Palmyra... and the ones that do exist are so overgrown that you don't even recognize them at first. Things just want to grow in the tropics!

Anyway, the point is that doing seawater sample collection requires that you wade across the reef flats on the north shore of the island to get to breaking waves, which is a bit of a process. 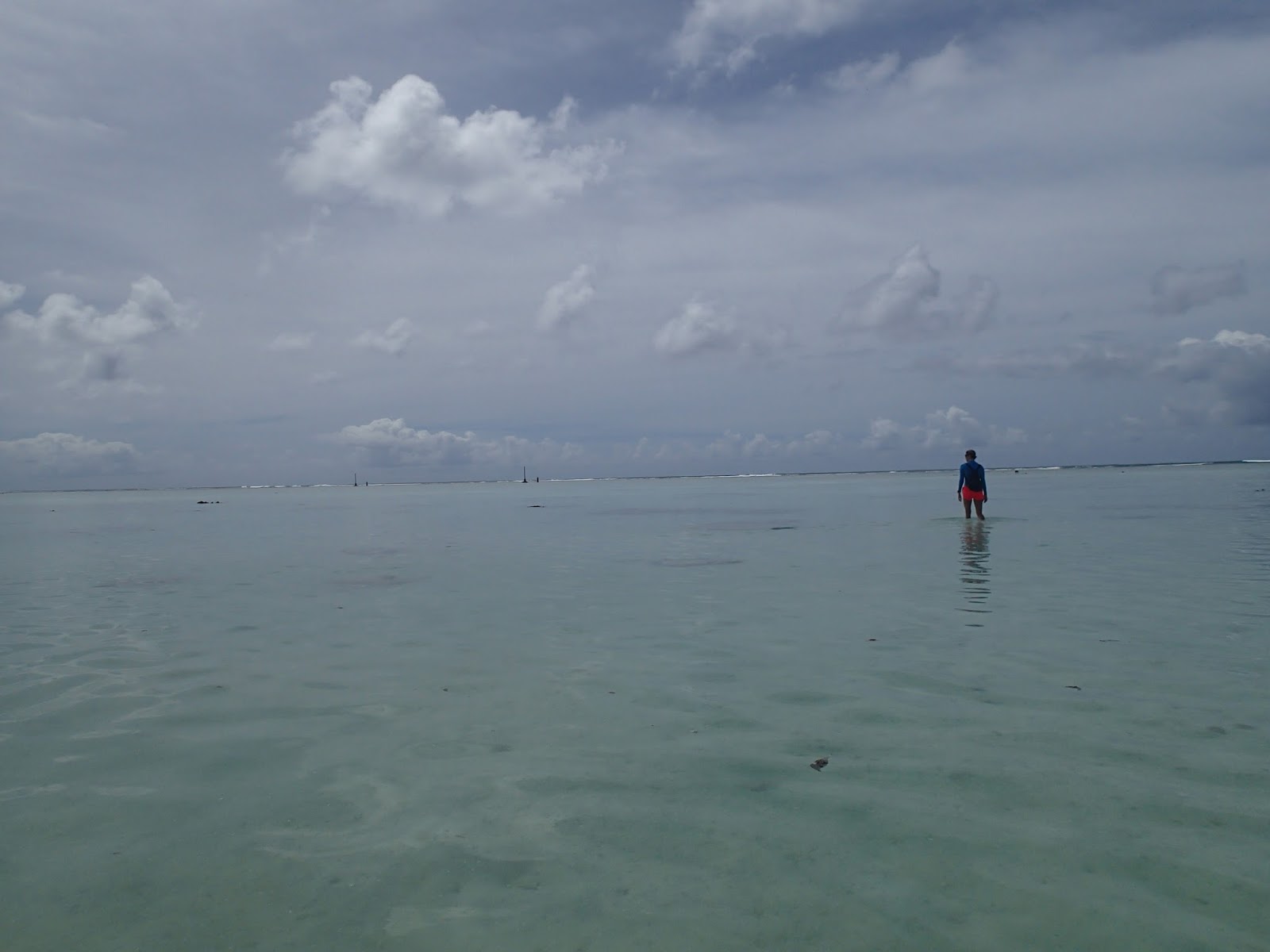 (see the breakers way off in the distance?)

But the data that we end up with will be one of the best resources out there for understanding exactly what an El Nino event does to seawater isotopic composition - especially when combined with the information returned from the moored instruments. Now I just need to figure out how to thank the Nature Conservancy!
Posted by Kim Cobb at 10:05 PM